Something a bit different today. As I have previously mentioned my wife and I are doing an escalation campaign of Horus Heresy. Today we played our first game. 500 points using the Zone Mortalis rules.

The mission was simple enough. Kill points, with the secondary objectives first blood and slay the warlord. In fluff terms I imagine these are a small group of salamanders who have gone to ground during the drop site massacre, and an emperors children kill team sent to find them. In the standard zone mortalis scenario you have to keep half your army in reserve. Helen started with her Delegatus and a squad of pyroclasts, with her breachers in reserve. I started with my Delegatus and a squad of Palatine Blades, with my Kakophoni in reserve.

In deployment Helen picked the left side of the table from my perspective. A long corridor with a door toward my end of it. I deployed behind the door, my reasoning being I could move up to the door, open it an execute a charge - but Helen would not be able to do the same thing because the door is on my half of the table. 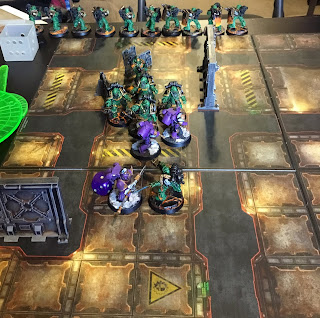 The plan worked! However in ZM you can overwatch on full ballistic skill if you pass an initiative check. So unfortunately my palatine blades charged onto a hail of fire, and only two of them made it into combat, with the Delegatus losing a wound. Due to my legion rules, I had to challenge - stupidly I did so with my Delegatus, even though any Palatine Blade could issue a challenge. Helen made the sensible decision to sacrifice the sergeant of the pyroclast squad, leaving her Delagatus free to mince up my remaining squad members. 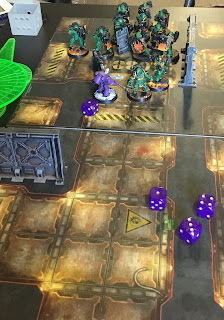 When the dust settled, the palatine blades had cut down 3 of the pyroclasts, and the delegatus  had slain there sargent in a challenge. However, the Salamander delegatus killed the two palatine blades in retaliation. The Breacher squad arrived just in time to observe my delegatus get cut down in the second round of combat. Emperors Children characters are much more potent on the charge, and so in the second round the Salamanders got the full benefit of their 2+ artificer armour save. 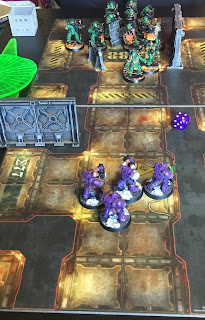 Briefly, I had no models on the field. However, before the end of my game term my reserves turned up. They launched a disappointing salvo of noise on the massed salamanders, rolling poorly - killing one of their own number thanks to the gets hot rule. 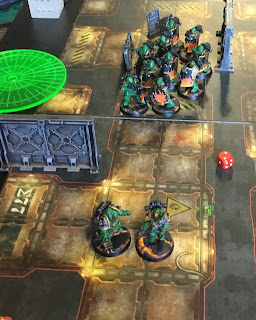 The Salamanders swiftly crushed the latecomers - leading to a crushing victory and securing their bolt hole from the massacre. For now.

at 21:03:00
Email ThisBlogThis!Share to TwitterShare to FacebookShare to Pinterest
Labels: 30k