I know. I know. I'm nothing if not inconsistent. I have, in fact, made a start on the next five fallen in my painting queue. However, it came to my attention that the third edition of Malifaux is out shortly, and the rules are basically known at this point since there was an open Beta.

So, what started as an activity of rationalizing my Malifaux miniatures collection (a lot of Guild and Outcast stuff is no longer desperately useful to me) ended up with me clearing out the last two unpainted Maliufaux models I own which have sat out on the side for an extremely long time. 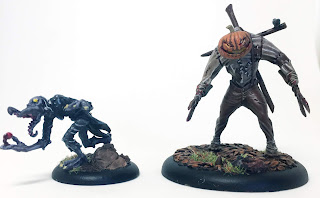 Read more »
at 17:45:00 No comments:
Email ThisBlogThis!Share to TwitterShare to FacebookShare to Pinterest
Labels: Malifaux

So the second character in my Fallen Angels detachment is the Librarian. Now, technically the model is a Chaos Sorcerer; but with the fallen, it's a question of degree. As there is no specific model I decided to go for the Librarian from the old Dark Vengeance boxed set, which happily can be picked up on eBay for a reasonable sum.

The paint scheme was a matter of some debate, as there is very little in the way of description of how librarians dressed in the time of the Horus Heresy. There are references in some of the novels to the Librarians having blue robes. I decided to interpret this as being the inside color of the robes. To hint at the fact that this marine now uses spells from the Chaos spell list I decided to paint the blues in the slightly more turquoise tones used by the Thousand Sons, rather than the royal blue of most imperial librarians.

Read more »
at 19:33:00 No comments:
Email ThisBlogThis!Share to TwitterShare to FacebookShare to Pinterest
Labels: 30k, 40k

Behold the mighty rhino APC. Not a massive fan of how this turned out. The edge highlighting is weird and chunky. No matter how much you paint black, it still kind of looks unfinished on a big tank. I did some weathering. The chipping came out quite nicely which you can see. I used some forge world weathering powders on the tracks and wheels and around the bottom of the tank. Which look a lot better in real life then they do in this photo, but still somehow don't quite pop.

Still, having done a character, a squad, and a tank I now get to loop back around and do a character. Might get these fallen done this week if I power through.

at 19:05:00 No comments:
Email ThisBlogThis!Share to TwitterShare to FacebookShare to Pinterest

Dark Angels and a painful month.

Yeah. I started a new army. When Vigilus Ablaze came out I looked at the Fallen angels detachment and thought to myself. Hmm. Two of the people I am most likely to play against play Dark Angels. This will be enormous fun.

I've always had a soft spot for the fallen. Not Imperials, but not quite Chaos worshipers either. Probably. Just sort of doing their own thing. Desperately seeking redemption, fighting for the right to exist.

They can and do exist at all points on the spectrum from out and out villains to the space A-team. With no real official models, I decided to make mine fairly sympathetic. Essentially, I made heresy era Dark Angels.
Read more »
at 20:19:00 No comments:
Email ThisBlogThis!Share to TwitterShare to FacebookShare to Pinterest
Newer Posts Older Posts Home
Subscribe to: Posts (Atom)