So the second character in my Fallen Angels detachment is the Librarian. Now, technically the model is a Chaos Sorcerer; but with the fallen, it's a question of degree. As there is no specific model I decided to go for the Librarian from the old Dark Vengeance boxed set, which happily can be picked up on eBay for a reasonable sum.

The paint scheme was a matter of some debate, as there is very little in the way of description of how librarians dressed in the time of the Horus Heresy. There are references in some of the novels to the Librarians having blue robes. I decided to interpret this as being the inside color of the robes. To hint at the fact that this marine now uses spells from the Chaos spell list I decided to paint the blues in the slightly more turquoise tones used by the Thousand Sons, rather than the royal blue of most imperial librarians. 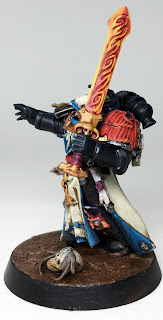 I also decided to do his force sword orange. Which is another slightly chaotic trope. Although only nowadays, back in the 90's orange was the default color for force weapons. 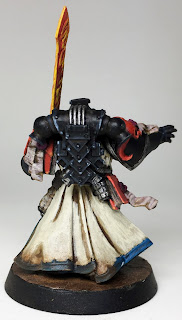 After the thing with the Rhino tank yesterday where I was like 'I also used weathering powders but you can't see them' I made sure to take a picture where you can see the really nice effect (or I think so) that you get from the use of weathering powders. I did also decide to convert the model somewhat by adding a random 30k resin backpack. His armour is a bit 'wrong' from a historical point of view but I think you can probably handwave this by saying he is important enough to have custom armour. Most of it is obscured by robes, so identifying a specific mark is difficult. 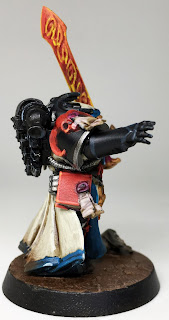 Now to move on to the other nine members of his squad. Although I might have to leave the house tomorrow for a bit of novelty.

at 19:33:00
Email ThisBlogThis!Share to TwitterShare to FacebookShare to Pinterest
Labels: 30k, 40k