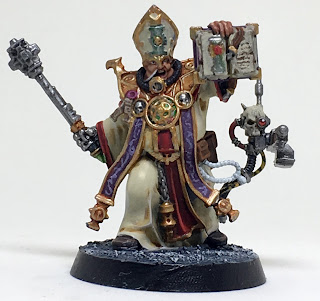 Over the last three days or so I painted Taddeus the Purifier from Blackstone Fortress.


Two reasons for this. The first is starting on the 11th of Jan a my wife and a friend are going to be playing through Blackstone Fortress, every Friday until we complete the game, however long that might take. I will be playing as Taddeus. Going right back to my school days I always enjoyed playing the Cleric's in Dungeons and Dragons and similar. So, for an RPG like game that kind of character archetype, with some buffing and some damage, is appealing to me. Also, I really enjoy the ecclesiarchy in 40k. The absurd self righteousness an assuredness. The fact that in a world where everything is a giant stinking meat-grinder that turns humanity into slurry at an alarming rate, Taddeus sleeps easily in the knowledge that he is definitely doing the right thing. Blind faith offers a sort of life hack for remaining mostly sane in an absurdly difficult universe, possibly not unlike the real church in the middle ages, but unlike reality in warhammer 40,000 there really are insanely powerful demons that want to seep into your mind while you sleep and burn the galaxy for shits and giggles. This sort of credible external threat is what allows what would otherwise be simply a disgustingly authoritarian theocracy into something which can be cast as heros.... but that whole bizzare thing is really interesting to me. Much more interesting then the Space Marines who I feel often get softened into being straightforwardly noble good guys.

I also get to include him in my sisters of battle army, which is just amazing. And while he isn't a hyper optimal competitive choice his data sheet is good enough that you aren't tying one hand behind your back by taking him. I'm really proud of the paint job. While warhammer TV did put out a tutorial for the robes, I had to improvise the bit of the model. His  stole is a bit more purple then the 'Eavy Metal team painted it but I am pleased with the results. I also think I did a really good job on the face. Helen got me some nice brushes from Games and Gears and I was allowed to have them a week so early (Fair because her gift from me was a Nintendo Switch with Pokemon Let's Go which she simply had to play as soon as it was released) . I feel liked they upped my standard a little bit - although in fairness before then I was painting everything with a single (somewhat abused) GW small layer brush.  I especially like the lense on the servo skull; I think that came out just right.

I should stop painting things this year so I retain some inspiration for my 500 models in 2019 challenge... but like unshakable faith in the God-Emperor, painting keeps me sane.
at 20:26:00
Email ThisBlogThis!Share to TwitterShare to FacebookShare to Pinterest