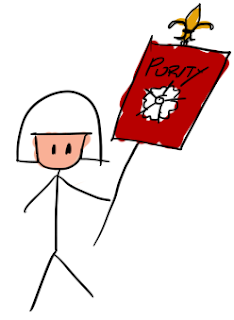 I don’t often do tactical reviews on here – I’m mostly about painting cool models. However I do love the Sisters of Battle, and so here are my initial thoughts on the Beta codex. Unless you play a lot of 40k, the rest of this post is going to be fairly incomprehensible.


Faith
Faith got nerfed hard. Gone are the days of having extra moves and extra rounds of shooting.

Instead we get + 3 Movement in the movement phase, and +1 to hit in the shooting phase.

I’m going to go out on a limb and say the movment one needed to be nerfed. Getting a free extra move (with Celestine) was a little absurd and a negative experience for opponents. The shooting change is a little more offensive because +1 to hit does not affect flamethrowers, so it’s more situational.

We still have one to let us fight twice in the fight phase, and the all-important healing one.

In addition we gained an act to let a unit have a 4+ save against mortal wounds in the pysicic phase – which could be really good if facing an army relying on a powerful psyker and an act to automatically pass morale checks.

Faith is also no longer a flat act per turn, but we get a pool of faith points (3+1 for every 10 faithful models in the army) and we have to spend them for each act. Each act has a score you need to beat on a D6 roll in order to manifest it, but you can get +1 from various sources.

I think faith is still useful, but I think investing a lot of points in flags and support to make it work is a bit of a mistake. I think it’s less key to the army then it once was.

Most of these are really good.
Bloody Rose get +1str and +1 Attack on the charge.
Sacred Rose get over watch on a 5 or 6.
Ebon Chalice get +1 to Faith Tests
Valorous Hart get 6+ Feel no Pain

Two I think are obviously worse are:
Our Martyred Lady: +1 Faith point when you loose a unit
Argent Shroud: When you kill a unit, you get a faith point on a 4+

Obviously I need to get some games in but I don’t feel like the new faith system is that good, compared to the flat and consistent buffs offered by some of the other convictions.  Our Martyred Lady is the main cannon colours that people use, so maybe this is intentional by Games Workshop to try and populise some of the other colour schemes.

HQ Choices
Celestine
A bit cheaper. Lost a wound down to six wounds. When she comes back from the dead you have to place her as close as possible to where she died, rather than deep strike. No interaction with the (new) faith mechanic). Although less potent Still an auto include in my opinion. She’s a robust fast moving HQ that provides a buff to invulnerable saves.
Canoness
same as ever. Probably you sit a minimally upgraded Canoness on your back line handing out +1 to hit to Retrubutors and exorcists.  If you give her the Book of St Lucus (Relic) then everything within 9” can have +1 to hit and a 1+ Invulnerable save if you make her your warlord and give her the relevant trait.
Uriah Jacobus
50 points (Down from 100) Which makes him a bit of a bargain. His shotgun works a bit differently, Str 5 at half range, rather than the old double damage.

Provides a couple of buffs:
Word of the Emperor – If a unit within 6” Flees, on a 4+ it does not flee.
Banner of Sanctity -  +1LD within 6”
War Hymms - +1 Attack within 6”
Missionary
One less wound and one less WS and BS compared to Uriah. Loses the fairly marginal Banner of Sanctity. Only costs 35 points.
Taddeus the Purifier Blackstone fortress.
Can be taken in the sisters of battle list without issue as he has the Ministorum Preist Keyword. (Unlike the elite Pius Vorne who can’t be taken easily) He costs 50 points the same as Jacobus, but he only has the stat line of a missionary. He, does, however, have a power maul making him the best priest at hitting people. He doesn’t have Word of the Emperor or the Banner of Sanctity but retains war hymns which is the main reason to take a priest. Interestingly he doesn’t have the missionary keyword so you can take him and still take Uriah or a vanilla Missionary.

Battle Sisters Squad
Same as ever. However, due to the new holy trinity Stratagem you may want to consider running a heavy flamer and a melta. If you fire a flamer, bolter and melta all at the same target you can spend a command point to get +1 to Wound on the whole squad. +1 to wound on a Heavy Flamer is quite nice. If you don’t want to spend the command point, you can still splitfire the melta off at something else.
Elite

Geminae Superia
they no longer form a squad with Celestine, but they don’t take up a Force organisation slot if you take Celestine. Cheaper in point, but there ability has been nerfed. Now when they take a wound for Celestine it becomes a mortal wound (like a tau drone) rather than getting to use their own save. Probably still vuagely worth it, and Celestine can still heal them up. Not an automatic thing if you find yourself short on points.

Repentia
Down from 17 to 15 points each. And with a new stratagem. For 1CP you can roll a dice every time one is slain. On a 4+ the enemy that slew that model takes a mortal wound. Otherwise much the same.
Mistress of Repentance
Identical to last edition – but don’t use up an elite slot if you take Repentia (which would be the only reason to take a Mistress)
Celestian Squad
Identically pointless to last edition. Sisters with a combat buff that don’t want to be in combat, and a solidly ‘okay’ bodyguard rule. Auto-pass. If there was a ever a unit GW needed to do something, anything, with these veteran sisters are it.

Preacher
25 point elites choice priest that provides access to war hymms. Has a unique rule about giving -1LD to Chaos units within 3” (woo). Has a laspistol and a chainsword and can’t be given wargear.
Hospitler
As last edition but can now target all Adeptus Ministorum units, not simply Adepta Soritas units.
Diagolus
A little more useful. Let’s you re-roll failed faith tests for friendly units within 6” – But this model costs twice as many points now.

Arco Flagelants
Unit entry is the same as ever, but they now have a stratagem just for them which lets you make three rather then D3 attacks, however at the end of the phase you have to roll a dice for each Arco Flagelant – on a 6 that model dies.

Crusaders
Two points per model cheaper.
Death Cult Assassins
Identical to last edition
Pius Vorne (Blackstone Fortress)
Difficult to take because if there are any <order> units in the detachment they won’t get access to convictions. Generally seems not to be useful, unless I have missed something.
Fast Attack
Seraphim
Yes. Here things get really interesting. Hand flamers are back to D6 shots rather than D3. Rather then re-rolling failed invulnerable saves, they instead get +1 to their invulnerable save giving them a 5++. Have them bubble up around Celestine and they have a 4++. Expect to see 10 of these with hand flamers in nearly every list. You also get a new stratagem. For one command point on the turn they arrive from deep strike you can get to shoot with them immediately – and for that round of shooting the hand flamers have a 12 inch range. You can still shoot with them again in the shooting phase as normal. This is pretty good.

Dominion Squad
Best unit is still good. Still has the excellent vanguard rule. Interesting new stratagem here. Blessed Bolts. For one CP all storm bolters in a unit get ap -2 and 2 damage. Given that Dominions can have five storm bolters, this is pretty good. Will it edge out melta’s and find a space in most lists? I’m not sure.
Heavy Support
Exorcist
35 points cheaper, and the missiles now do D6 damage. Much improved. One in every list. Two in some lists.

Retributor Squad
As last book. I like a Hvy bolter squad to stand backfield with your utility canoness and exorcist. Hitting on twos without needing to worry about the faith mechanic is nice.

Immolator
Still Good, and now the immolation flamer is five points cheaper.
Repressor (Forge World)
Ah Yes. The mobile bunker that is the Repressor. Still very impressive. Has janky forge world wording so you can only embark <order> units, and so you need to be mindful of that. Rhinos and Immolators are more permissive.

at 16:49:00
Email ThisBlogThis!Share to TwitterShare to FacebookShare to Pinterest
Labels: 40k, Sisters of Battle