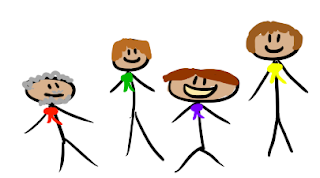 These days, the quality that people want more then anything else is authenticity. In film, in literature or in food. Imperfections are embraced and the mass produced, packaged and processed are dismissed.

Is the same thing happening in politics?

Jeremy Corbyn seems to be another in a long line of more authentic political figures; joining Nicola Sturgeon, Nigel Farage and Caroline Lucas and perhaps even breakout backbenchers like Jacob Rees-Mogg. Political figures all of them whos message seems to be "I'm all about this, if you agree vote for me. Otherwise, don't". You can make the argument for some, or all, of the people on this list that they are playing at being authentic in order to gain votes. What's significant is that they don't seem to be saying "vote for me and I will solve your problems; whomever you are". They are not playing the game the same way Tony Blair played it. This is, I assume, the logical gymnastics that Corbynistas employ when they brand everyone and anyone a "Blairite". I get the feeling the aspects of Blairism they are talking about are the methods, rather then the ends. The rise of special advisers, the invention of spin, reliance on focus groups. The idea that the aim of the game is to get elected and stay in office rather then to advance any particular cause or intellectual position.

I think the non-Corbyn supporters are struggling with this paradigm shift. Perhaps they are right to be. As much as I like the idea of an array of small parties with idiosyncratic leaders arguing from tightly defined ideological platforms, the problem is if a centrist, boring, mass appeal party continues to exist it will hoover up votes. Consider a fictional ballot which offered the choice between Nigel's UKIP, Dave's Conservatives, Jeremy's Labour, The Greens and the SNP. I can imagine that a lot of people looking at that ballot would think, well, there is a party on there I love. However, there is another party on there I am terrified of. My terror is a stronger factor then my love so; I will vote for Dave as he has the best chance of keeping out that person. Enter 1000 years of mediocre Tory rule where they unaccountably go around making themselves very wealthy, and get away with it as long as they don't upset any one group quite enough.

The same thing is happening over the water in the USA. I don't think many people plan to vote for Hillary Clinton for any reason other then they are terrified of Trump. I don't think there is a vast public appetite for more establishment cronyism, which is what Hillary represents. Rather, there is an appetite for "Not Trump".

Proportional Representation; this would free voters to vote for the candidate they love, rather then against the candidate they fear. It would allow small narrowly defined parties to collaborate on areas of mutual interest, of which there are many.

To this end, I hope Jeremy is confirmed as leader of the Labour Party tomorrow. His narrow fantatical appeal means that the labour party will have to consider supporting a move towards proportional representation, and we might, at last, fix our democracy.
at 19:33:00
Email ThisBlogThis!Share to TwitterShare to FacebookShare to Pinterest
Labels: Comment, Politics