So I'm playing in a Kill Team Tournament at the 40k Open Day in Nottingham this weekend. I had not played 40k in a good long while because I have been sucked into the Malifaux, but I got the chance to try the six possible scenarios one time each with Helen. Mostly I lost, but then Sisters are quite comparatively under powered at the moment.

I thought I'd share some pictures and the list I am taking. I painted these girls a long long while ago, and it shows in places. However, I firmly be leave that repainting miniatures is where madness lies.

And now onto the pictures I love these classic old metal models. I hope any eventual plastics live up to there awesomeness:


Randomly red hair! Actually in my full army (as you may have seen earlier on the blog) my sisters have a mix of hair colours. Not sure I'd make that decision again. My Celestian Squad have the classic white hair look, but this model is borrowed from a different squad, and all my melta gunners have ginger hair.

A minor conversion this one. That's a plastic space marine bolter. I think at one point I had this model holding something else, maybe a combi plasma. Originaly sold as "Sister Superior with bolter" but I just use her as a unique looking regular sister of battle. Handy for this game were I need to designate one bolter sister as a specialist. 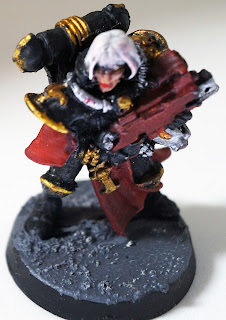 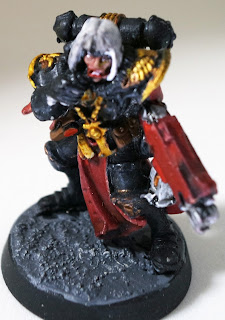 Now this Immolator is quite interesting. I'ts a mix of the mark two plastic Immolator, with the turret and font detailing from the second edition metal/plastic hybrid kit. With a Forge World resin ram on the front for good measure.  I do also own a stock plastic Immolator, but the plastic sister poking out of the top looks... weird. Old plastic sculpt. I think these classic metal parts are much nicer.
at 23:06:00
Email ThisBlogThis!Share to TwitterShare to FacebookShare to Pinterest
Labels: 40k, Sisters of Battle, Wargaming