So, having painted all the Malifaux I was all set to order some more Malifaux, when my wife 'suggested' I might want to paint some of the other models I own. So I've decided to try and get my 30k Emperor's children painted up; if possible by the HH Weekender in February. 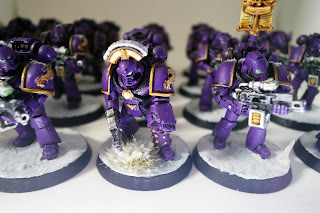 30k is an interesting one because it is a game that very few people seem to play. My wife plays, and two other friends of mine who live far away. So it is, primarily, a painting project. So, why choose the third legion. Well simply, they are the biggest bastards; totally irredeemable egoists. Sometimes it's fun to be the bad guy. Painting these chaps was faintly soul destroying after painting Malifaux stuff. lots of repetitive steps to get all 20 looking the same. 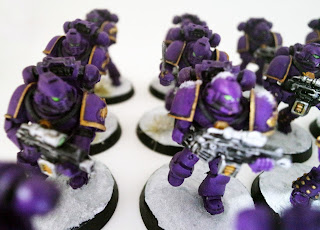 I do have an army list that I am aiming for. 4000 points. Which is just how I do things when I collect armies. One of the things I sort like about Malifaux is you get to just collect models without worrying about lists and what guns everything has. I'll build a large army list that hangs together and then pick sub units out of it. I'm going for the rite of war which makes Kakophani troops choices and gives them relentless. I'll briefly outline the list. 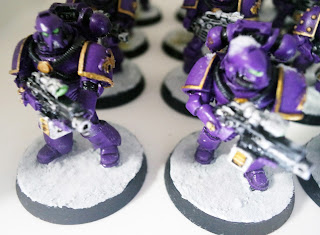 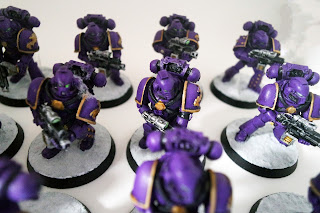 Very small and elite, and potentially not very effective. From what I can tell, the 30k meta packs lots of tanks. However, it should be a fun fluffy list to play around with. I should note that right now I run a Legion Champion instead of the Primus Medicae, because I own one and I'm hoping Forge world come out with a Primus Medicae model. (Or Fabulous Bill! I would buy the shit out of Fabulous Bill) There are a few other bits I would like to add. A Command squad would be nice to have because banners are cool, but they just aren't very good. I'm also drawn towards the Sicarian and the Xiphon but I don't see piles of point in investing in stuff which won't even make the cut of a 4000 point army. I'll be painting up a Rhino, Kakophani and Apothecary next. (Unless it's more Malifaux or even the new Blood Bowl stuff...)
at 21:51:00
Email ThisBlogThis!Share to TwitterShare to FacebookShare to Pinterest
Labels: 30k, Emperor's Children, Wargaming