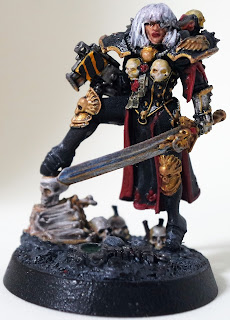 I have always been a big fan of the Sisters of Battle, and the John Blanche illustration that this model is based on in particular. So I simply knew I had to get hold of one. I talked about rules in my last post so this post is going to be all about the model.


I was finally able to get one on Saturday morning by going and waiting outside my local Games Workshop an hour before it opened. Lucky I did because I was the first in the queue when they opened and the store had only been sent one model.  I think Games Workshop must have massively underestimated the demand for this. It's in and out of stock on the Games Workshop web-store. Every time they cast up a new batch it goes out of stock in minutes. However, GW have said that they are going to keep making them for as long as there is demand - I just wanted to get mine and get her painted up before I have to travel for Christmas.

The model is made out of Citadel Finecast, even though they do not call it that any more. It is not the resin that Forge World use, as it is much softer. GW seem to have sorted out their production issues in that there were no mould lines, misalignment, bubbles or other defects. However, Finecast does still retain that the issue that the parts are attached to the sprue in lots of places, and it does require rather more work to clean the pieces up, compared to Forge World resin or a GW plastic kit. This can be a slightly nervous experience given how soft the material is. The model also came in more pieces then expected, with separate parts for the rear loin cloth and shoulder pads, as well as the backpack, arms and the cables that run from the bionic eye to the backpack.

This has enabled the model to have two sculpted legs, rather then a loin cloth which ends in a solid block of material. 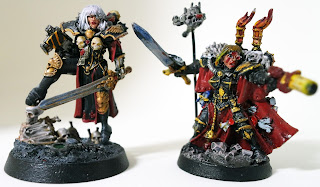 In comparison with the metal Jes Goodwin canoness the thing that is first apparent (apart from the fact that my skill at painting has not really improved in what must be at least five years - indeed the biggest difference between the two is that GW now make much nicer gold paint!) is that Veryidian is a good head taller. In part I guess this is because unlike every other battle sister, she has the sublimely ridiculous armoured high heeled boots - but also miniatures are just bigger these days. The detail is finer. However, I'm pleased to say that she looks like she is the same sort of thing as the metal sisters. Hopefully if we do see plastic Sisters of Battle they will be along the same lines. Although I will note that Veryidian was specifically based on the famous John Blanche painting so perhaps she is not that indicative of what an entire line would look like? Who knows.

One issue for me is she is on the new bigger bases, but in Codex Imperial Agents the Sisters are on the smaller bases. I think the metals would look better on the larger bases, but I am reluctant to put in the work if plastic sisters are in the offing.

at 22:17:00
Email ThisBlogThis!Share to TwitterShare to FacebookShare to Pinterest
Labels: 40k, Finecast, Sisters of Battle, Wargaming