As you are probably aware a new version of that most venerable of games, Blood Bowl, came out recently. So I thought I should show you my painted Blood Bowl figures. Starting with my halfling team.

Now I have had these little blighters for ages and the paint jobs on them are quite old. I have touched some of them up a tiny bit, and drilled holes on there bases to accept the new peg ball but they are fundamentally the same old half-lings. Most of the players are the GW metal half-lings, but the treemen are from Willy Miniatures - because GW has yet to make an acceptably scaled generic treeman for Blood Bowl. I guess 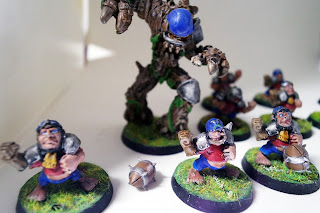 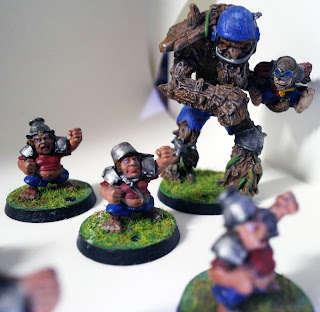 the fact I chose halflings as my original team for blood bowl tells you something about my attitude towards it. Blood Bowl is a very good game, but it has been around for a very long time now, and some people are very very good at it. So there is a clear temptation to play the under-powered funny nonsense team so that when you get pounded into the floor you can just shrug and go 'oh well halflings'. That said, I do have an understandable affinity for the fat men who are terrible at team sports. I painted them in bright, halflingy colours. Though not the typical greens because I did not want them to blend into their bases. I think there are something like five unique sculpts for the halfling players, which actually isn't bad. I love the creative use of kitchen utensils as headgear. 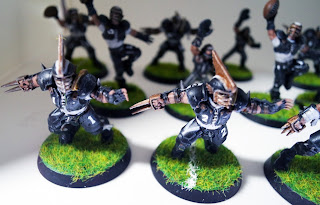 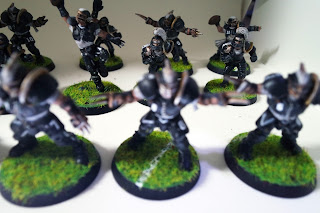 Now onto my mostly new team from the exiting new Blood Bowl box. I got the humans, my wife has the orkcs. I always wanted to do a human blood bowl team, and have had bits of one knocking around forever. I also always wanted to paint my Human Blood Bowl team in a black strip because my favourite corner of the Old World (y'know, before it exploded) was the City State of Nuln. I actually more or less followed a guide to paint these guys. Although, badly because I lack skill. I almost balked at painting the stripey trousers because freehand is not my friend, but I figure that if you don't try you don't get better at stuff. The new plastic humans are ace, although there is an unfortunate amount of duplication as the team is made up of two identical sprues. I only painted 5 of the six linemen from the starter set, because my philosophy is to paint the maximum number of positionals, and then as many linemen as you need to get a collection of 16 models. That might not be the best approach but it's what I decided to do. A side effect of this is that two of my blitzers and two of my catchers are from the previous edition of Blood Bowl. So they look like tiny children. I will replace these as soon as specialist games make it vaguely plausible to do so. Team boosters with new sculpts would be the nicest way, but I could cope with buying a new human team for £20 to harvest the four models I need. However I refuse to buy another new boxed game, complete with pitch etc just for the want of four models. So until then I'll use the tiny old models. 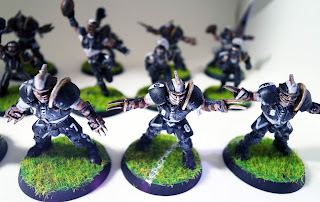 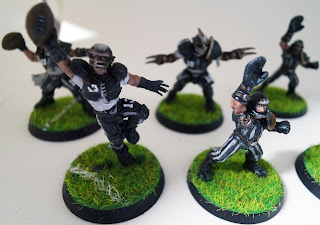 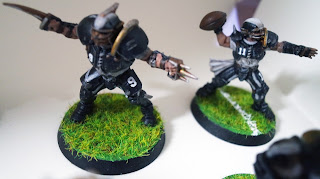 Finally the big guys. I have a few big guys in my collection. I've painted up the ones with rules in the new edition of blood bowl.

Morg N Thorg here is a classic, classic GW miniture. I'm sure when they get around to making a new model he will be twice the size though. He is also the stand in Ogre for my human team until a new model arrives.


These two metal human star players got put out years ago sort of at random. I bought them and put them in a box. Many years later (and at least two house moves) they finally get built and painted.

I have a few things on the go. New Malifaux in the form of the Bandersnatch and a few things from Black Friday. I'm still working on my third legion stuff slowly but surely. However now, in light of the new Sisters of Battle army list I have a few new things to paint up for that army. (Including the stunning new Canoness Veridyan)

However, the big hold up there is finding some time to go outside and spray models when the world is not covered in the creepy winter fog.

at 19:17:00
Email ThisBlogThis!Share to TwitterShare to FacebookShare to Pinterest
Labels: Blood Bowl, Wargaming