Brexit, for the last time. 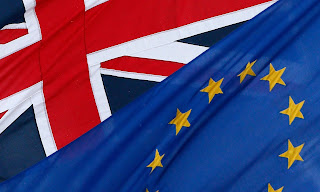 If I don't screw it up, this post should be published some time after the polls close, but before the referendum result can be guessed at. That's because I don't want people to say I am trying to influence the vote, or am only saying this because of the likely outcome.

I want to talk about democracy.


To me, democracy is a collaborative, not an adversarial process. You argue and debate; and sometimes it gets quite lively but the objective should be to arrive at the truth of the situation. Now, I feel like in the Brexit debate arriving at the truth is only half the battle. Your decision to vote is likely biased mainly on your priorities, and assessment of risk.  These things are subjective and are borne from your own personal context and the things you hold to be important. I like to think that no one I have debated with has gone away to vote because they were labouring under a falsehood.

When we debate things we should remember that, as long as your opponent is advocating a peaceful democratic was of deciding the issue, that person is your opponent; not your enemy. Most of my closest friends are pro remain. I'm pleased to have such good friends that I can debate with robustly, and afterwards we can chat about Warhammer or Computer Games or whatever else it is. Obviously, when we get to the 24 hours before a vote tensions can run a little high, and reasoned debate with citations tends to give way to image macros and stirring video. I actually agreed with a good friend of mine who tends to be my main debating partner that we would both have a fully partisan final 24 hours, were we would post slogans and shout friendly abuse to cheer on our side and get the vote out. That should be all good fun.

When the results are known, at whatever ungodly hour tomorrow that is, it's my real hope that we can accept them and work collaboratively towards shaping whatever future we have chosen together. I know some people will be angry if they lose; but the only anger you can have is for those on your side, and ultimately yourself. If you have lost the vote it means that your arguments were not persuasive enough. You did not talk to enough people, you did not get your point across enough. Don't seek to blame the other side.

But we need to move forwards together, respecting the democratic will of the population; not spend the coming months angling for some kind of recount or re run. For my part, if we vote to remain I intend to launch myself fully into trying to make the best out of Europe. At the European Election imminently following a Remain vote, I would most likely vote for a Conservative MEP rather than a UKIP one, because I think the cause of fixing Europe is better advanced by the ECR block than the EFDD block. The conversations and debates I want to have following a remain vote are about what kind of Europe we should have - that's the collaborative journey I would like to go on with you.

But if we vote to leave, and I very much hope we do, we need liberal voices campaigning for a new relationship with the continent based on freedom, democracy, sovereignty and global aspirations, not on hate and fear. That will only happen if voices from the remain side accept the outcome of the vote and let us move forwards together. If we keep getting constantly pulled back to this questions 'Can we have another vote?' 'Was the vote valid?' then we will not progress and the country will stagnate and the loudest voices will be the ones shouting for isolation.

So, turn on BBC One. Wonder, as I do, what it is they inject Dimble with to keep him going all through the night. Cheer if you win, commiserate if you lose. Tomorrow, lets move forward.
at 22:01:00
Email ThisBlogThis!Share to TwitterShare to FacebookShare to Pinterest
Labels: Brexit, Comment, Politics