Legion of Nagash (so far) 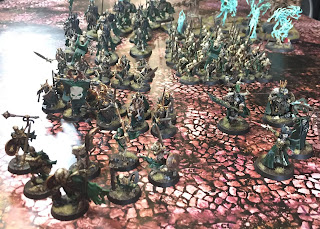 As those (all three of you) who follow my instagram will know, I have been painting a horde of skeletons to channel the nervous energy generated at work into something useful. I completed this mammoth unit of 40 over the bank holiday weekend and decided now would be a good time to take a look at the skeletal horde I have assembled so far.


Not a skeleton at all but a vampire. I love the classic tropyness of the Warhammer vampires. I know Games Workshop is trying to give them a more bestial look now, and almost everyone uses that vampire on foot with the one batwing because, in game, he can fly and he costs the same number of points. I love me some classic B-movie sexy vampire lady. This model was only ever available in 'Citadel Finecast' so made sure to pick one up from Warhammer World in Nottingham, where they had a few on the shelves and I could sort through them looking to make sure I didn't have any air bubbles or similar. I'm really rather pleased with how she turned out - specifically the face and eyes. pale white flesh is a difficult thing to get correct. I'm a little less sold on how the armour turned out. I used a P3 paint that I have called "blighted gold" and washed over it green. I'm happy enough with how it came out.

Also not a skeleton, but a Necromancer. Actually a "spare part" from my Coven Throne (which is not yet painted to my eternal shame). I thought it a massive shame to leave him sitting in a bitzbox, so with a few snips to the bottom of his cloak he was quickly mounted on a base. He's not a very impressive fellow so I added a spare scythe blade from the parts I had left over from building my black knights. A skull (soon to be a new friend!) added to the base and I think he looks like a rather good model.

You've seen this model before but included here for completeness. This cheerful dude was the leader of my Skirmish warband. I really like this model, and it served as the inspiration for my entire army. I just really like evil skeletons.

Now joined by the other Wight King model. Another unfortunate finecast only model however again, by going to the shop and looking through all the packets I managed to find a good one. I always think this guy looked like he used to be a Chaos Worshiper in his past life, but for whatever reason his soul was claimed by Nagash rather than any of the ruinous powers. Part of the reason I say this is that he has a lot of fur, which is not really a design element seen on other elements of the Deathrattle range.

Again, more spare parts from the Coven Throne kit. Based up with some gravestones and I think they look quite good. Now, here's the thing. I don't really like the nighthaunt stuff. I like skeletons and vampires. However, I thought I may as well paint these up as they were essentially free. I painted them the super lazy but effective way using Nihilakh Oxide as a wash. However, if you look at the new Nighthaunt stuff coming out with Age of Sigmar 2.0 it seems like they are starting to paint some of the other details in actual colours. I may end up repainting these and the other nighthaunt below especially as they are bringing out two new technical paints, Hexwraith Flame and Nighthaunt Gloom. Then again, I don't know if I could just paint over the model, or strip them easily without having to re-do the bases. So maybe I will leave them alone.

Much like the banshees above, these spirit hosts were painted in the very familiar lazy method using mainly Nihilakh Oxide as a wash. I may go back and re-do them, or add to them. Equally I might not. I only have these because I wanted a Coven Throne - so naturally I bought the "Start Collecting! Malignants" box and so these guys and the Black Knights included were essentially free.

10 man unit of skeletons with swords. Used to be useful for a cheap summon, though that's all changed now. Still useful to get you to the three units of skeletons needed for a Deathmarth Battalion. I painted these a long while before the 40 spear skeletons down the bottom. I'm quite pleased with how they came out but I will talk more about painting Skeleton Warriors in a moment.

I know. I know. They are green. Due to the name, I decided to let them have black shields, since they seem to be made out of some kind of bat skin. These look quite good, but I must say from painting them they are really old kits. On the bottom of the horse the legs kind of weirdly merge into the barding. You also don't really get enough Black Knight heads to give each model a unique head. I go around this by using some hexwraith heads, the ones with flames, and I don't think it looks too weird or out of place.

These guys are one of those rule of cool or form of function units. I know that great weapons are probably the way to go with these guys, but I think that the tower shields really look good. I like the idea of these guys as tough as nails bodyguards for my leaders. The standard was so large it looked weird plain green so I added a decal from the 40k Imperial Knights decal sheet. I did then paint over the decal to give it green glowing eyes rather then red, and a lighter green outline. I think it worked well.

So, I painted 40 skeletons all at the same time. This might have been an error as highlighting all the bones very nearly drove me quite mad. However I am very pleased with how they turned out and the weathering in particular. I think with the sword skeletons I perhaps went a little overboard with the gold, so I limited it a bit more on this unit. I'm not sure if I should invest in some kind of movement tray for these guys as moving a unit of 40 models is going to take rather a long time, but by the same token a large part of the strategy of age of sigmar is in positioning. At this point however I am going to wait and see what Age of Sigmar 2.0 holds.

I already did a rather detailed post when I painted up my Sepulchral Guard and I don't really have anything to add. However I have added them on the end here for completeness. Annoyingly enough you can't run these in a Legions of Nagash army! But they are painted up to work alongside my death more generally.

When I first started to collect I had a basic plan for my army that revolved around skeletons and vampires.

I was essentially going to run a list based around the Deathmarch formation and a Coven Throne. However, when the Legions of Nagash book came out, I decided I also needed to add Nagash to my collection as well as some Morghast Archai so I could occasionally run a "Grand Host of Nagash" army.

I think that it is good to have a 2000 point army you can run without Nagash though, in case games get a bit repetitive.

So, in my "still to be painted pile" I have Nagash and the Coven throne - who are on hold now pending the release of those two new technical paints I talked about as well as 30 more skeleton spearmen who are awaiting reinforcements so I can drive myself mad painting a second big block of 40.

However, some of the new Nighthaunt stuff coming out looks good, and I will have to give the new rules a good read and think carefully about future additions.

at 00:13:00
Email ThisBlogThis!Share to TwitterShare to FacebookShare to Pinterest
Labels: Age of Sigmar, Deathrattle, WHFB