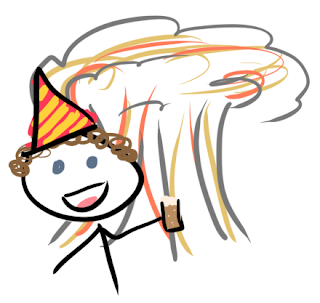 As a teacher, I seem to spend half my life trying to give teenagers perspective. They have an alarming tendency to view everything in frankly apocalyptic terms. Now I think everyone needs a bit of perspective.


It's that black and white view. I'm going to pass these exams and everything is going to be amazing. Or, I'm going to fail them and be a failure for the rest of my life.

I've said something dumb and now everyone hates me forever - I will be a social pariah for the rest of time.

I mean, I had one student a couple of years ago now who was in such a state about exams she ended up being prescribed some kind of medication so she could sit exams without popping like a microwave baked potato.  Lovely kid, intelligent, kind, perceptive. I ended up bringing in my own A-level results (which are distinctly un-edifying)  and saying look. I mucked up when I was in college. Now I'm a teacher, it's not the end of the damn world. We got there in the end. Most of the time they get there in the end.

However this post isn't really about that. I realised the other day that I have not made any kind of socio political comment on my blog in about a year.

This is because, for over a year now, everyone has been going around in a frankly unreasonable state of perspectiveless despair.  I got an invite to a new year's eve party last year that read something like "Lets stab 2016 in the chest and make sure it's dead". I was alarmed then, and I'm alarmed now.  Now all I get to hear about is how Brexit or Trump Trexit? Brump? is going to cause all sorts of problems. Or alternatively how there is a conspiracy to thwart brexit and how we will all be waving the european flag and singing ode to joy well into 2020.

Maybe, maybe. And have an opinion about these things, sure, and debate them if it brings you joy. But we don't need to be such misery's about it all.  We might brexit, we might not. We might die in a nuclear fireball, we might not. But, really, why let these things grind you down.

This christmas, have a beer. Put on a conical hat and enjoy yourself. Life's basically better now than it has ever been, and despite everything, it will most likely be better in 10 years then it is today.

Cheer up guys. Whatever it is. It's not that bad.
And Merry Christmas.
at 12:12:00
Email ThisBlogThis!Share to TwitterShare to FacebookShare to Pinterest
Labels: Comment